Google have today revealed the production version of their highly anticipated driverless car. That’s right, if you didn’t know Google have developed a car that requires absolutely no human intervention with the hope that their technology could help reduce the amount of accidents on roads. The car won’t even have a steering wheel or pedals! you literally just sit in it and it takes you where you need to go. According to Google, they have been working incredibly hard since may to get what was a mere prototype turned into a fully functioning self driven car: “We’ve been working on different prototypes-of-prototypes, each designed to test different systems of a self-driving car—for example, the typical “car” parts like steering and braking, as well as the “self-driving” parts like the computer and sensors”. During the testing phase of the self driven car there are safety drivers present who have access to temporary manual controls should they need to override anything. Other people looking into self driving cars include Volvo who have done it with the Volvo S60 and Mercedes who have done it with the S-Class. 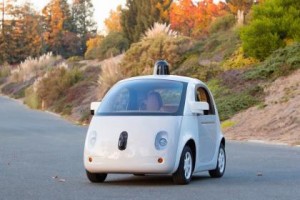 As you would expect, Google have a fair few interesting ideas of how they can put these self driven cars to use, one particularly interesting idea is that you will be able to summon these cars by simply pressing a button on a smart phone. From the location on your phone a self driven car will be sent, meaning you don’t haver to actually own one in its entirety but rather just share as part of a network of cars. Commenting on this idea, Google co-founder Sergey Brin had this to say; “Cars aren’t used 96 per cent of the time,” said Google co-founder Sergey Brin. “In peak time, 30 per cent of city driving is people looking for parking. That goes away if you have cars that drive themselves and drop you off and go find another passenger.” He has a point, it would also eliminate those awkward conversations with taxi drivers we all put ourselves through. Never again will I have to ask the generic ‘busy night’ question.

The only thing we can think to criticize the Google car is it’s looks, it’s no Mercedes-Benz SLS that’s for sure, it looks a bit like a a character from a Pixar film or a dodgy toy.